An Error Repeated? The Shi’a/Military Clashes 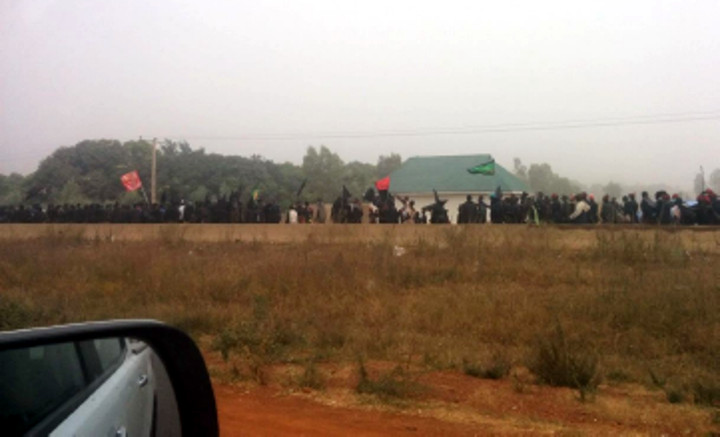 On Saturday December 12, 2015 Nigeria’s social media lit up with reports of violence in Zaria, Kaduna state. According to initial reports from print and electronic media, there was an assassination attempt against the Chief of Army Staff, Lt-Gen. Tukur Buratai whose convoy was in transit “to pay homage on the Emir of Zazzau and attend the Passing Out Parade of 73 Regular Recruits Intake of Depot Nigerian Army, Zaria.”

There are inconsistencies in the initial reports. The alleged assassination attempt was placed on the road in front of their Baqiyya headquarters. The road, which is the only artery out of Zaria towards Sokoto, was reportedly overwhelmed by the Shi’ites. Officers in the Army Chief’s convoy came down to negotiate a passage but were unsuccessful. General Burutai himself then alighted from his vehicle to negotiate passage. This, is when it was alleged that the stoning started. The COAS was allegedly hit, and his security detail began to shoot in the air to disperse the Shi’ites. The Shi’ites did not budge and the military opened fire to cover their principal, after which they left the location.

Over the next two days, it was reported that the Army went after Ibraheem El-Zakzaky, the leader of the Shi’ites, at his residence. There were reports of gunshots and explosions through the day, and night, and by the end of Sunday, reports came through that Muhammad Turi, Zakzaky’s deputy had been killed, as had Zakzaky’s wife, a son, and some other senior members of the group. An SBM source in Zaria claims that there are almost 200 corpses at the Ahmadu Bello University Teaching Hospital’s Shika Morgue.

The Nigerian Army, according to some sources, was forced to tackle the problem of the Shi’ites once and for all, because of a belief that the group poses a latent threat to the stability of the region. Based on security reports, the Shi’ites have consistently defied constituted authority, with Police and other security agencies too afraid to confront them.

Residents of Zaria have had to live in fear of the sect due to the impunity with which they carry on their activities. There have been allegations of murder by the group, with the police too intimidated to investigate and bring the culprits to justice. This is similar to the allegations that were levelled against Maitatsine sect in Kano, and the Boko Haram sect, before each sect had a full blown confrontation with the army, then mutated into insurgencies that left thousands dead. The difference however is that in the 1980s, it was “easy” to kill off the Maitatsine movement with force and douse smaller cells of the sect in other places outside Kano after the main body had been routed. However, as Boko Haram, a sect much smaller than Zakzaky’s group has shown, in these days, simply forcefully confronting these sects does not lead to their end. Rather, they morph into something else, more deadly.

There is a history of bad blood between Nigeria’s security agencies and the Shi’ites, some say going as far back as during the military dictatorship of General Sani Abacha. The current escalation may also have roots in the thinking of the sect that the Nigerian Army is overwhelmed with tackling the Boko Haram insurgency. Such thinking has emboldened the sect to challenge the army on more than one occasion.

This latest violence is not without precedence. On Friday November 27th, 2015, a Shi’ite Arba’een procession between Kura, Kano State and Zaria, Kaduna State was attacked and several participants were killed. Surprisingly, the leader of the Shi’ites, Sheikh Ibraheem Zakzaky, absolved the usual suspects, Boko Haram, of culpability. His remarks hinted at his belief of the security agencies were responsible. Things had come to a head just over a year before that however, when on August 22, 2014, three of Zakzaky’s sons were killed. Again, this happened during a procession.

An SBM source who has witnessed these processions says that large portions of a major interstate express-way, sometimes stretching for kilometres, are usually blocked by the marching. Travellers and other road users are forced to drive against incoming traffic.
Nigerian security and other high-level persons tend to move in convoys that drive at break-neck speed. It is natural for them to see such traffic as an inconvenience, no less when the individuals in the convoys could be considered “high value targets” in what is often thought of as dangerous territory.

It is important to understand the context within which the Shi’a group operates in Zaria. The Zaria/Kaduna/Kano axis is the melting pot of various Islamic movements in West Africa, many of whom are often violently opposed to, and despise one another. The Izalas who are Wahabi Sunnis are based in Kaduna. The Ahmadiyya are also in the region. Tijanniya Sufis with links across West Africa and the Sahara are also a large sect in the region. The Kalo Kato group is also based in Zaria. Zakzaky’s Shi’a group is simply one of the Islamic sects in the region. However, it is unique in that all the other groups, while very different from each other, are Sunni Muslims. This has led to a perpetual siege mentality being fostered on adherents of the Shi’ite sect led by Zakzaky.

We can only hope the governments both in Kaduna State and at the federal level would step in to quell the tensions before things spiral out of control. With news coming through about the arrest of the Sheikh, a lot of observers are raising red flags over the similarities between the 2009 capture and execution of then Boko Haram leader Mohammed Yusuf in police custody. Nigeria cannot afford to repeat the errors of 2009 now.

The Nigerian military is already stretched fighting Boko Haram, there is violence in the North Central and there is a possibility of an insurgency resurfacing in the Niger Delta when the Presidential Amnesty Programme ends in a matter of a fortnight. Adding a die hard Shi’a insurgency with millions of adherents in the heart of Nigeria is a recipe for disaster that Nigeria can ill afford.
We cannot repeat the cycle where each newly elected administration through ill handling and underestimating the threat allow insurgencies to rise which they will then spend the rest of the administration fighting. This was the mistake the Obasanjo Administration made with the Niger Delta. This was the mistake that the Yar’adua/Jonathan Administration made with Boko Haram. In a season when resources available are on the decline, we cannot afford to channel scarce resources to a totally avoidable war.