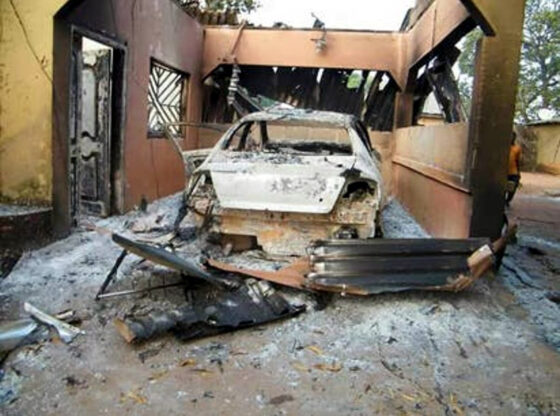 30 January 2019
Quartz
Nigeria’s rice tariffs not slowing imports
Rice is Nigeria’s most popular food staple. A few generations ago, pre-independence in 1960, long grain rice was something only elites had with any regularity, for many Nigerians it was something for the weekend or special occasions…

Financial Times
Nigeria warns over ‘foreign interference’ ahead of election
The Nigerian government has said it will not accept “foreign interference” in February’s presidential elections after the EU, UK and US spoke out against the sudden suspension of the chief justice…

Jesuit Review
A peaceful, if not controversy-free, transition in D.R. Congo
Opposition leader Felix Tshisekedi was sworn in as the president of the Democratic Republic of Congo on Jan. 24, marking the country’s first peaceful transfer of power since independence from Belgium nearly 60 years ago…

Bloomberg
Nigeria jolted ahead of election as president suspends top judge
Nigerian President Muhammadu Buhari suspended Chief Justice Walter Onnoghen just weeks before what’s set to be a tight presidential vote in Africa’s most populous nation, in a move the main opposition party condemned as an “act of dictatorship.”…

Mail & Guardian
Nigeria braces for knife-edge election (again)
His name is Jubril al Sudani, they said. The real president is dead. A clone, an impostor imported from Sudan, has been running the country for months…

22 January 2019
Business AM
Bankers see naira slide, high interest rate, stock fall in 2019
Amidst political uncertainties and low business confidence in the economy in the build up to the 2019 general elections, bankers under the aegis of the Financial Market Dealers Association (FMDA), are predicting a routing of Nigeria’s currency, the naira with depreciation against the United States dollar strongly seen in the first, second, third and fourth quarters of 2019…

21 January 2019
Bloomberg
Insurgents plan ‘massive attacks’ in Nigeria, minister says
Nigeria’s government has evidence that Boko Haram Islamist militants as well as armed bandits are planning to carry out attacks across the nation ahead of elections next month, Information Minister Lai Mohammed said…

18 January 2019
Premium Times
Farmers-Herders Conflicts: Buhari, Atiku campaign manifestos lack solutions
Nigeria may continue to walk a violent tightrope as measures towards addressing the country’s farmers-herdsmen conflict, considered a threat to national survival, are not in the re-election campaign manifesto of President Muhammadu Buhari and only mentioned with a casual air in Atiku Abubakar’s plans…

10 January 2019
TRT World
Is the US making moves to counter Chinese and Russian influence in Africa?
The Trump administration recently launched a new Africa policy to counter the ‘predatory’ practices of Russia and China, but many experts in the region say the US is too late to the game…

9 January 2019
Quartz
Nigeria elections risk security crisis with Boko Haram, herdsmen
On Nov. 18, news broke about an attack on an army base in the village of Metele in northeastern Nigeria by suspected members of the Islamic State West Africa Province (ISWAP), a splinter group of Boko Haram, the terrorist organization…

5 January 2019
Vanguard
Southern Kaduna: I still feel unsafe
The recent violence in Southern Kaduna is the longest on the record, a newly-released report said…