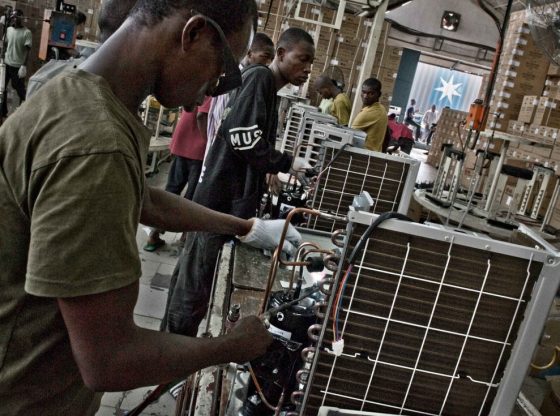 Nigerian manufacturers recorded an overall inventory of unsold products worth ₦420 billion for the first quarter of 2020, the manufacturers association said. According to the MAN acting director-general, Ambrose Oruche, the high amount of unsold inventory may not be unconnected to low purchasing power, high cost of production and the ongoing COVID-19 pandemic, which he said had disrupted global market economies. Oruche, as a way to help reduce the volume of unsold inventory, suggests that the government should initiate policies that would strengthen the purchasing power of consumers. This, he explained, would stimulate aggregate demand and deliberately support industries to reduce the production cost of manufactured products in the country. He also advised the government authorities to enforce the executive order 005 that encouraged government preference and patronage of made in Nigeria goods to address challenges of unsold inventory. Considering the positive impact of the covid19 pandemic, Oruche said Nigerians have been forced to buy local goods on account of the distortion in the global economy. Data from local manufacturers have shown that government agencies maintained a penchant for foreign products, even when local substitutes of similar quality were available. This means that local patronage increased in the first quarter of 2020. The MAN director-general also advised sustained implementation of the backwards integration policy to improve local sourcing of raw materials for manufacturing as such was essential to improving the manufacturing sector to deepen industrialisation and economic development in spite of the coronavirus pandemic.

President Muhammadu Buhari has approved the reconstitution of the board of the NNPC. The reconstitution comes after the expiration of the term of the previous board members appointed in 2016. Members of the new board are Mohammed Lawal from the North West, Tajudeen Umar (North East), Adamu Mahmood Attah (North Central), Magnus Abe (South-South), Stephen Dike (South East), and Pius Akinyelure (South West). Akinyelure, a former national vice-chairman of the All Progressives Congress, South-West zone, returns as the representative of his zone. The new board will be in place for three years. Buhari spokesman, Femi Adesina, did not say who will serve as the board’s chairman, a position Emmanuel Ibe Kachikwu, former minister of state for petroleum resources, occupied from 2016. Kachikwu was replaced by John Asuquo Thomas, who served as alternate chairman until Timipre Sylva was appointed as minister of state. Sylvia has, however, not been officially announced as the board chairman.

The CBN has introduced a new timeline within with banks must resolve complaints relating to ATM dispense errors and failed PoS transactions. CBN spokesman, Isaac Okorafor, said that the new guidelines are aimed at improving the service quality. “The CBN, in its determination to further enhance service quality, particularly quick refunds when customers experience failed transactions, dispense errors or disputes, has revised timelines for reversals and/or the resolution of refund complaints on electronic channels, with effect from June 8, 2020,” Okorafor’s statement read. Effective 8 June, banks have been ordered to ensure that failed on-us ATM transactions (when customers use their cards on their bank’s ATMs) are reversed instantly; different from the current three-day timeline. “Where instant reversal fails due to any technical issue or system glitch, the timeline for manual reversal shall not exceed 24 hours,” the statement said. “Refunds for failed not-on-us ATM transactions (where customers use their cards on other banks’ ATMs) shall not exceed 48 hours from the current three to five days. The regulator said it would impose sanctions, in the form of monetary penalties/or suspension of the acquiring/processing service(s) or both, would be imposed on erring institutions for failure to comply.

Nigeria’s tally of confirmed COVID-19 cases on Sunday rose to 10,162 as 307 new infections were announced by the Nigeria Centre for Disease Control. There were 14 deaths same day bringing the total number of confirmed deaths from the virus to 287. Lagos recorded the highest figure of cases reported with 188 infections. The state also remains the epicentre for the disease in the country There was a decline in the number of infections reported on Sunday (307) compared to the highest daily figure of infections so far since the beginning of the outbreak in Nigeria, 553 reported on Saturday. The agency in a tweet late Sunday night said the 307 new cases were reported in 15 states. These are Lagos, Federal Capital Territory (FCT), Ogun, Kaduna, Oyo, Bayelsa, Gombe, Kano, Delta, Imo, Rivers, Niger, Bauchi, Plateau and Kwara. “Till date, 10162 cases have been confirmed, 3007 cases have been discharged and 287 deaths have been recorded in 35 states and the Federal Capital Territory,” it said.