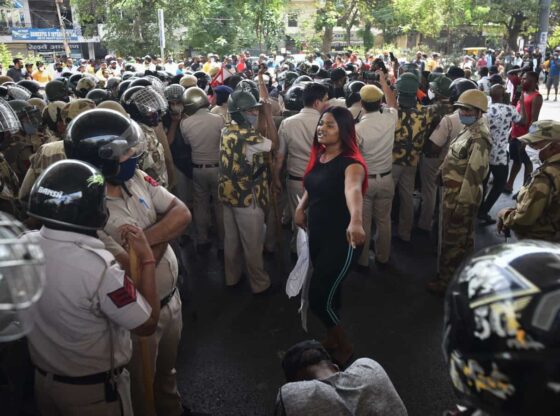 Barely 72 hours after electric power was restored in Maiduguri, the Borno State capital, Boko Haram insurgents on Saturday blew up another transmission tower in the city. Sources said the insurgents planted explosives on each leg of the tower, which they detonated at about 6 a.m. On Wednesday, jubilant residents of Maiduguri were seen in a video that trended on social media as they celebrated the return of electricity after nearly two months of blackout. It took officials of the Transmission Company of Nigeria (TCN) that long to repair the transmission tower brought down by the insurgents at a location about 50 km from Maiduguri. While reconnecting the installation, three TCN officials were severely injured by a landmine planted by the insurgents. Another official was said to have lost his life after falling off a tower. The Saturday morning attack did not come as a surprise as residents had expressed fears of the insurgents plunging the city into darkness again as soon as the lights were restored. A security agent said the tower that was attacked was not far from the one brought down in January. “It is a major setback for Maiduguri because the tower that was brought down has affected other poles,” he said. “They planted bombs on each leg of the tower which caused it to go down, and they had also fired at some of the high tension wires that caused the lines to cut into bits,” he added. It took officials of the TCN and the Borno government nearly two months to temporarily fix the first tower. With the latest attack, residents of Maiduguri would suffer from the attendant harsh economic impact the resumed blackout would cause. The TCN and the Borno state government were yet to speak on the development at the time of filing this report.

A 43-year-old Nigerian man’s death in West Delhi’s Tilak Nagar neighbourhood after an alleged brief interaction with a policeman in the early hours of Sunday prompted allegations of brutality by police and triggered protests by around a few dozen people. The police, however, denied all allegations and, insisted that an initial medical examination of the victim, identified as Leonard Lyeanyi, had not revealed any visible external injuries and that the man’s death had nothing to do with his interaction with a policeman and a home-guard on patrolling duty in the area. Urvija Goel, deputy commissioner of police (west), said while the report of the autopsy — carried out by a board of doctors and recorded on camera — was awaited, the police were in the process of acting against the protesters, who allegedly took to rioting near Vikaspuri, under the Tilak Nagar police station’s jurisdiction. The police said Lyeanyi was living in Krishna Puri neighbourhood of Tilak Nagar. According to his friends, Lyeanyi had been living in Delhi for the past many years and was into medical tourism, particularly catering to patients from Nigeria. Lyeanyi’s relative, Yabo Stan, told the Hindustan Times that the man was walking from his home to the main road to board a cab and receive a patient at the airport in the early hours of Sunday when he was stopped by two policemen riding a motorcycle. Stan alleged that the policemen tried to extort money from Lyeanyi. “Eyewitnesses have told me that when Lyeanyi said he only had enough money to pay for his cab fare, one of the policemen hit him on the back of his head with a stick. We have seen CCTV footage, which shows a policeman hitting Lyeanyi,” alleged Stan. “The police have taken control of all the CCTV footage and are burying all evidence,” Stan added when asked for a copy of the CCTV. Later, some Nigerians rushed Lyeanyi to Deen Dayal Upadhyay Hospital, where he passed on during treatment. While the police continued to check CCTV footage to stitch together the entire sequence of events, dozens of people from African countries took to protesting at the Outer Ring Road. Initially limiting themselves to sloganeering against the police, some protesters later allegedly vandalised vehicles on the road. The police briefly baton-charged the crowd to disperse them. The protesters dispersed, but quickly returned, with some agitators pelting stones and bottles at the police.

Royal Dutch Shell and seven banks accused one of Nigeria’s largest oil producers of defaulting on loan repayments that stand at more than $900 million and are locked in a court battle to reclaim the money, legal documents show. The previously unreported impasse stems from a deal that Aiteo Eastern E&P Co. did six years ago to purchase a major interest in one of the country’s most prized oil blocks and a pipeline for $2.4 billion. Zenith Bank, Fidelity Bank, Guaranty Trust Bank and other Nigerian lenders loaned the company $1.5 billion to support the acquisition, while Shell — the former operator of the assets — provided $504 million in financing. The oil major and the banks filed arbitration claims against Aiteo in December in their efforts to recoup the funds. The legal actions came 13 months after Aiteo obtained an injunction from a federal court in Abuja that prevented its creditors from collecting on the alleged debt. That order is still in force. Aiteo, controlled by Nigerian tycoon Benedict Peters, denies being indebted and in default. It argues that the lenders are obliged to restructure its repayment schedule due to unforeseen “events of force majeure,” including rampant crude theft and pipeline leaks, according to the lawsuit it filed in Abuja, where it was granted the injunction. The standoff with Aiteo adds to the legal headaches facing Shell’s Nigerian operations. Already this year, a court in the Netherlands ruled that a unit of the Anglo-Dutch group was liable for environmental damage in the Niger Delta and the U.K.’s Supreme Court allowed thousands of Nigerians to sue the company in London over pollution. Shell also began arbitration against Nigeria’s government in February after repeatedly failing to overturn a 2010 court order to pay compensation to a community over a historic pipeline rupture. The tussle over the loans took a new turn last month when Aiteo persuaded a local court to restrict Shell’s access to its Nigerian bank accounts. Aiteo argued that the energy giant misrepresented the condition of the pipeline it sold in 2015 and then under-counted the volume of crude that was being pumped to a Shell-run export terminal. Shell’s actions have made it “practically impossible” for Aiteo to meet its repayment obligations, said the Nigerian company, which is demanding billions of dollars in damages. Shell has dismissed the accusations as baseless and appealed against the freezing order.

French oil giant Total SE is evacuating most of the remaining employees from its liquefied natural gas project in northern Mozambique as insurgents attacked a town nearby, throwing Africa’s biggest private investment into disarray. The fresh violence that follows attacks at the turn of the year suggests Mozambique’s armed forces are struggling to regain control of the region surrounding the $20 billion project. Total, which bought a 26.5% stake in the LNG development for $3.9 billion in 2019, has said it wants security to be restored in the area before resuming onshore work with the aim of starting gas shipments in 2024. Total has decided to reduce the workforce on the Afungi site to a minimum, the company based near Paris said in a statement Saturday. The resumption of work that was contemplated at the start of the week will also be suspended, it said. The energy giant said it “trusts” the government, whose security forces are “currently working” to take back the control of the area. There were no casualties among employees at the project, Total said. The pullout comes as militants attacked a security convoy attempting to rescue more than 180 people who’d been under siege in a hotel near the project site, according to three people familiar with the matter. More than a dozen vehicles were ambushed late Friday during an operation to evacuate people from the Amarula Palma Hotel, and only seven vehicles managed to escape, two of the people said. While about 100 fled to the beach, many are feared dead, according to one person. The militants, who’ve previously aligned with the Islamic State, were still active in the town of Palma on Saturday morning, they said. The ongoing raid in Palma, less than 8 kilometres (5 miles) from Total’s camp and where a number of subcontractor companies are based, could be a watershed moment in the insurgency that threatens to dampen further foreign investment in the region. The rebellion that started in 2017 has left more than 2,600 people dead and caused about 700,000 more to flee their homes.