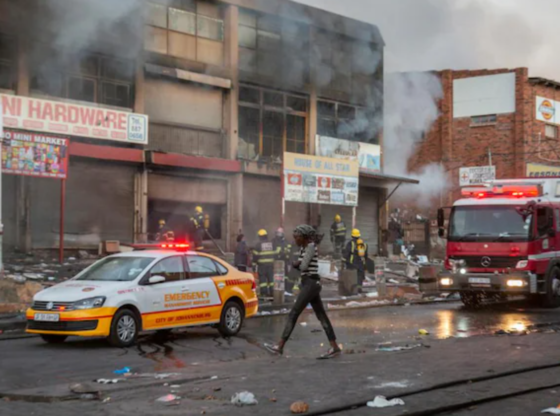 South Africa has been rocked by violence and looting for five consecutive days, with more than 70 people killed as grievances over the jailing of former President Jacob Zuma spiralled into the worst unrest in decades.

Following the jailing of the former leader, protests and mass looting have widened into an outpouring of anger over the inequality that remains 27 years after the end of apartheid. Poverty has been exacerbated by severe social and economic restrictions aimed at curbing the spread of COVID-19. More than 1,200 people have been arrested in the lawlessness that has raged in poor areas of two provinces, where a community radio station was ransacked and forced off the air on Tuesday and some COVID-19 vaccination centres were closed, disrupting urgently needed inoculations.

Many of the deaths in Gauteng and KwaZulu-Natal provinces occurred in chaotic stampedes as thousands of people stole food, electric appliances, liquor and clothing from stores, police said. The deployment of 2,500 soldiers to support the overwhelmed South African police has so far failed to stop the rampant looting. Mr Zuma turned himself in to police to begin his jail term for defying a court order to give evidence at an inquiry into corruption while he was in power from 2009 to 2018.

The inquiry is led by Deputy Chief Justice Raymond Zondo. Zuma has already launched legal challenges against his sentence, asking the court to cancel it on a number of grounds, including that he has been unfairly treated and that he might catch and die from COVID-19 in jail. Mr Zuma also faces a separate case relating to a $2 billion arms deal in 1999 when he was deputy president. He denies the charges. He will be eligible for parole after around four months, Justice Minister Ronald Lamola said last Thursday. 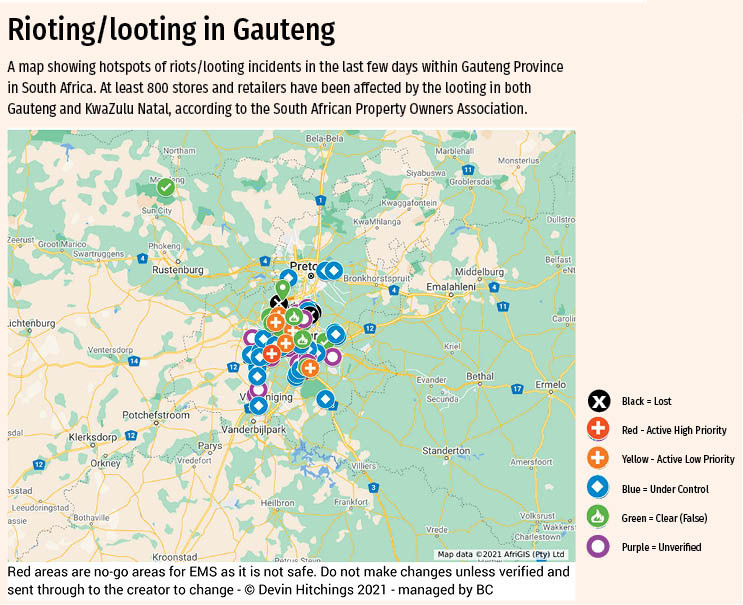 The immediate cause of the ongoing tensions in South Africa is the incarceration of former President Jacob Zuma at the Estcourt Correctional Centre in KwaZulu-Natal. Presently, the investigation of twelve masterminds of the protests-turned-riots is underway and preliminary reports indicate that the protests to halt the arrest of Mr Zuma were planned and executed on social media, which spiralled out of control and led to a looting spree.

Prior to his arrest, Mr Zuma and his supporters had suggested that any attempt to jail him could destabilise the country, a threat that clearly wasn’t taken seriously. Implicated in what authorities now call an insurrection is Zuma’s leading spymaster and South Africa’s former ambassador to Japan, Thulani Dlomo.

The remote cause of the violence and looting, however, can be pinned on years of structural and economic inequalities that have only deepened since the end of apartheid in the mid-1990s. Following the third wave of the pandemic and the 11 July announcement by President Cyril Ramaphosa to extend the Level Four lockdown – a move which meant that restaurants would only offer food delivery services, a prohibition of the sales of cigarettes, alcohol as well as public gathering, and a 20h00 until 05h00 curfew – complaints about its economic implications made the rounds on social media.

The adverse economic effects are disproportionately felt by the poor, who largely depend on the daily cycle of activities in the informal economy. According to 2020 Global Inequality Data, South Africa is one of the most unequal countries in the world, with the top 10% of households possessing 65% of national income. The country’s unemployment rate increased to 32.6% following mass retrenchments triggered by the pandemic.

A serious economic consequence of the violent protests is that it has caused the shut down of the country’s vital N3 highway – which links Durban, the country’s largest port with Gauteng, its biggest regional economy and home to Johannesburg, its largest city – disrupting national fuel and food supply lines. The estimated operational-asset costs to haulage companies is placed at about R300 million (₦8.4 billion) as at last count, and the looting – which has affected at least 800 stores and retailers – have led to an estimated loss of R5 billion ($141.2 billion), according to the Consumer Goods Council of South Africa.

More so, the spate of sporadic violence and xenophobic attacks all too common in South Africa is costing the country billions more in business and investor confidence. Given how quickly issues degenerate into ethnic, racial, and xenophobic conflict, it is evident that South Africa is sitting on a simmering powderkeg that can only be defused when structural inequalities are addressed.