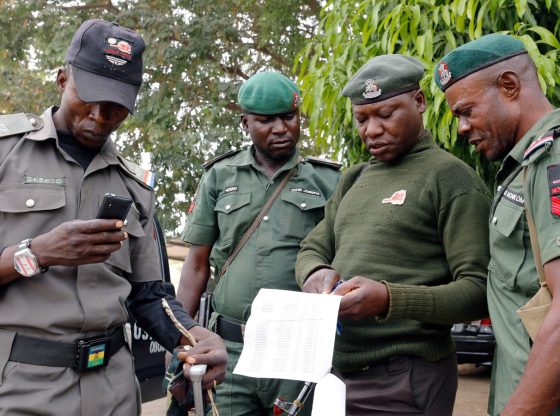 Nigeria’s 2023 elections are a mere four weeks away, and campaigns by leading presidential candidates are hitting a fever pitch. This week, the chairman of the Independent National Electoral Commission, Prof Mahmood Yakubu, while speaking at the UK’s Royal Institute of International Affairs aka Chatham House, acknowledged that the commission is getting ready for a runoff which may seem likely as even international observers now believe that the presidential election is too close to call.

According to section 134 of the 1999 constitution, the winner must secure the highest number of votes cast; and not less than a quarter of the votes cast in each of at least two-thirds of all the states and the federal capital territory. If no candidate secures this threshold, INEC must conduct a run-off election.

Asides from the uncertainty that is trailing the election’s outcome, the key security concerns that have dogged the run-up to the polls remain. This week, an incident that has the potential to reduce confidence in INEC and trust in the state made the rounds. It was reported that some Bi-Modal Voter Accreditation Systems (BVAS) have allegedly been moved at night into the Cross River State Governor’s Lodge, Calabar. The Cross River State Police Command and the Independent National Electoral Commission (INEC) responded with inconsistent statements by trying to deny the information and warned against “spreading information that can upturn the peaceful atmosphere in Cross River State in the light of the general elections”. Although the police flatly denied it, INEC promised to investigate the matter.

Following attacks on INEC offices and facilities housing such materials, especially in the South East, there have been concerns about the safety of electoral materials towards the conduct of a hitch-free election. The commission is yet to independently provide storage facilities that could keep its materials safe from arson or attacks on designated points and has outsourced protection duties to security operatives guarding government secretariats–a move that does not help INEC’s credibility, especially as political actors are growing suspicious of its intents.

The following are the security incidents that took place in the third week of January that may have a direct or indirect impact on the peaceful conduct of the elections.

• 18 January: No fewer than three persons were injured, on Thursday, when a twin explosion rocked a rally of the All Progressives Congress at the Rumuwoji Playground in Port Harcourt, the Rivers State capital. Two of those injured were women and were rushed to the hospital for medical attention.
• 19 January: Three suspected members of Eastern Security Network (ESN), the armed group of Indigenous People of Biafra, IPOB, were killed by the tactical team of the Imo State Police Command in an attempt to raze down a Police Station at Agwa in Oguta Local Government Area of Imo State after they had attacked Agwa Central Vigilante Group in the area.
• 20 January: On Friday at about 01:00 am, some gunmen whose number is yet unknown attacked the home of the Sole Administrator (SOLAD) of Ideato North LGA of Imo State, Mr Christopher Ohizu. They shot him in the leg, shot his two security dogs, burnt his house, and abducted him and two others, one Christopher Okeke and Onyedikachi Kanu, after which they drove away to an unknown destination with one of the SOLAD’s vehicles. The police are said to have launched a rescue mission.

While each of the three reported incidents is concerning, the report of double explosions happening in Rivers is even more concerning. Although the police in Rivers has denied it, the Publicity Secretary of Rivers APC, Nwauju, confirmed that Miss Hope Isaac, the worst injured among the victims, had 15 shrapnel removed from her legs in a medical operation. Per the police’s version of events, the violence was caused by factions in the community development committee who were paid for the hall but unfortunately did not disburse the money equitably and as such, “the fracas was not between members of APC and any other political party but between the internal factions within the said community”, the police said.

Furthermore, it is no longer surprising to hear of bomb explosions in Port Harcourt. Since 2020, there have been about 17 incidents of unclaimed bomb explosions across the country. Rivers lead the toll with at least five, only rivalled by Imo and Kaduna with three each. The last time a bomb went off in the state was in May 2021, when six people got injured in a dynamite explosion in the Mile 3 area of Port Harcourt. Rivers has also had its fair share of attacks on political actors since campaigns began last year. Also, Rivers’ proximity with Imo, where IPOB members are increasingly resorting to explosives, leaves it in a precarious position as arms inflow remains an ever-present danger.

Both narratives examine the vested interests that may make or mar an election. In the first place, the APC believed that the bomb was employed by members of the ruling PDP to scuttle the APC’s chances at the polls. Political suppression is also a key issue to watch out for as the polls loom ahead. One of the early warning signs has been the alleged storage of BVAS at the Cross River State Government House.

Furthermore, per the police’s version of events, it is not entirely out of place to have grievances arising from logistical issues to derail the electoral process. During the 2019 general elections for instance, at a Registration Area Centre (RAC) in Anifowose Primary School in Ikeja Lagos, the ad-hoc staff, mostly members of the National Youth Service Corps, appeared not to be interested in the election duty. Some of them noted that apart from the tedious election duty, they had not received their allowances as promised. They, therefore, insisted that they would not leave the RAC until their allowances were paid but after much agitation, however, the INEC officials were seen sharing the monies.

While the focus has been on ongoing and recurring security challenges that increase the chances of violence-themed polls, especially in the South East, one other major issue that may blight the polls will be dissatisfaction with logistics from not just political parties and interested stakeholders, but also from INEC itself. This week’s events show that this may likely be a key issue even on election day(s).

Chart of the week: Attacks on priests
What happens to APGA now?